skip to main | skip to sidebar

We thought we better warn you to put your ear protection on right away.  We found that the historical newspapers are online and easy to search.  We have already found two obituaries to help grow the family tree and Brother isn't taking it well at all.  He's ranting about seeing the library in court for doing something this terrible and how they should be ashamed of themselves for encouraging that tree's growth and what if a nut tumbles off of a limb?  Please take precautions now.  We have a long list of human relations to look up so it will probably be a long and annoying night.
Posted by Sir Pinky the Cat at 11:59 PM No comments:

Sorry about the continuing noise.  Brother must have gotten online or something and learned that the teaching assistant who is taking over our class is very fond of making little teddy sized quilts.  He didn't take that news well at all and he's been ranting about how he was sure this class was going to be one devoted to rabbit encouragement, but now he is sure this is going to be rabbit encouragement of epic proportions, and we better just drop out right away before we get more alarming ideas into our heads.  We just hope he doesn't stumble over any of the videos that our future instructor has done before, showing how to make the cutest teddy sized quilts in a simple, thirty minute session.  Thinking about that, maybe we better go ahead and put on our ear protection.  We are very afraid of the potential for ear damage should he learn of this.
Posted by Sir Pinky the Cat at 10:10 PM No comments:

Sorry for All the Noise

Sorry for all of the noise these last two days.  Yesterday we visited the teddy adoption center and adopted the nicest teddy horse, teddy alien and two bears.  Then on the way home we stopped by the homeless shelter and met the nicest teddy pup who was looking for a new residence.  The sibling count is up to 951.  We're very sorry for the resulting kitty shrieks.  And we're really sorry about the noise today.  The teacher's assistant for that quilting teaching class we are signed up for called, and since the class is going to be somewhat different due to our poor teacher breaking her leg, we will be getting a lovely gift certificate to spend on fabric and other quilting goodies.  We're thrilled with the gift certificate and are so happy the class hasn't been canceled or postponed, but we think you can pretty well guess that Brother feels totally the opposite way.  Anyway, we're so sorry about all of the noise he's been making.  He should be so ashamed!
Posted by Sir Pinky the Cat at 11:53 PM No comments:

Sorry for the continuing shrieks and shouting.  Brother is still pitching a fit about the library allowing a batch of us to set up shop there to promote teddy activities.  He's being absolutely awful about it to say the least.  Such a totally impossible cat.  Anyway, between his rantings about the library, he has also found time to rant about how we have allowed more homeless creatures to move in.  We have taken in nine more homeless animals lately, including a snow teddy, a cheetah, a lamb, a koala, a teddy pup and several bears.  Honestly, what did Brother want us to do?  If we hadn't taken in that snow teddy in weather like we have been having lately, she might have MELTED!  Did he want a poor, innocent snow teddy to MELT?  We are now up to 946 siblings.
Posted by Sir Pinky the Cat at 9:04 PM No comments:

Sorry for the Noise

Sorry for all of the noise.  We hope it didn't distract anyone from enjoying all of the lovely fireworks.  We set up that display at the library on Friday and twenty-five of us are currently working at it.  Naturally Brother was not pleased when he realized that such a large number of us had settled in at the library and he's been ranting ever since he figured it out, demanding to know what the library was thinking, allowing us in there, and complaining about all of the unsupervised reading that we are sure to be doing, and how nothing good will come of this.  We don't know what he's going to do when he learns we have already been invited back to do another display for Christmas.  We're sure it will be something that will land him on Santa's naughty list for multiple lives, though.
Posted by Sir Pinky the Cat at 11:52 PM No comments:

Create Your Badge This belongs to my human. I hope it isn't too alarming for anyone. 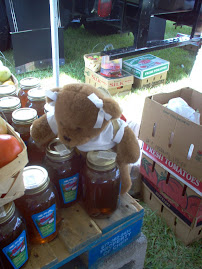 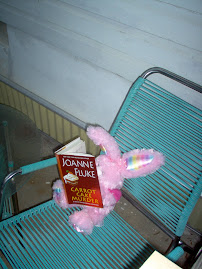 One of my rabbit sisters, Polly Bunny. I'm fairly sure our cousin Farmer Turley is looking into holding Joanne Fluke as an accessory due to this book. 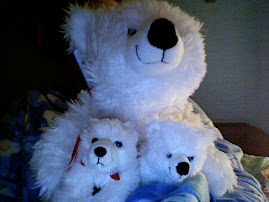 The hole rented by my tenant, W. Woodpecker 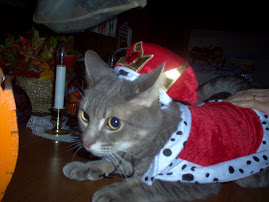